Things to do in Kosi Bay

Read more about what Kosi Bay has to offer.

Whether on holiday or for business travels, browse Kosi Bay Accommodation listings to find your ideal accommodation.

Kosi Bay is the main town in the Maputaland region in northern KwaZulu Natal. It is approximately 300km from Richards Bay and 80km from Sodwana. Kosi Bay is a misnomer as the town is 25km away from the ocean.

A series of lakes and a nature reserve set amidst spectaculour splendour and beauty. Borders with Mocambique to the north, a tourist destination par excellence - but 4x4's recommended. 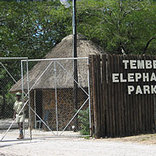 This remote park, deep in an area of sand forests, pans and wetlands in northern Tongaland, lies on the border between KwaZulu-Natal and Mozambique. The park protects the largest elephant herd in KwaZulu-Natal which is also the only re- maining indigeno